Menu
You are here:  Home>News>European Central Bank Toughens Its Stance On Greece 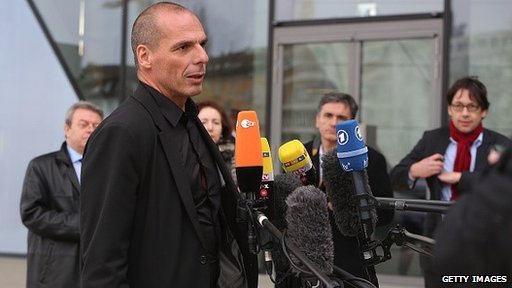 In a statement, the central bank said it would no longer accept Greek government bonds as collateral for lending money to commercial banks.
The move makes access to cash more expensive for Greece's banks.
The ECB said the suspension came as it could not assume a "successful" deal on Greece's €240bn bailout.
The newly-elected Greek government is in talks with international creditors over the terms of its bailout.
"This is clearly the ECB signalling to the Greek government: You're going to have to talk to [international lenders] the troika and get a deal,'' Jacob Kirkegaard, senior fellow at the Peterson Institute for International Economics told the Associated Press.
"Otherwise, really bad things are going to happen.''
The euro fell sharply against the dollar on the news, dropping more than a cent to $1.1331.


Analysis: Andrew Walker, World Service economics correspondent
The European Central Bank's decision reflects the uncertainty about whether Greece will reach an agreement on its bailout programme with the rest of the Eurozone.
Greek government bonds have such a poor credit rating that the ECB only accepts them as collateral if the Government has such a support programme in place.
The immediate direct impact on the Greek banks is likely to be relatively moderate. They can use other assets to borrow from the ECB and they can turn to the national central bank - but at a higher interest rate.
The move does however add to the pressure on the Greek government to do a deal.
Over the next few weeks the banks in Greece could face further stress.
Already, significant amounts have been withdrawn from accounts, and there is a possibility of further restrictions on their access to central bank funds.